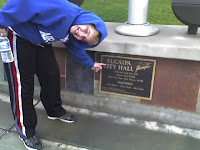 That may not sound like a lot to many of you.

Wylie began talking about a Thanksgiving Day race two months ago. He conceived of the race as starting at City Hall in Yucaipa and ending "at the outskirts of town" at the Starbucks by the freeway. That way, I could have a cappucino at the end of our race. (His idea).

Now, I'm certain Wylie's vision included throngs of people lining Yucaipa Blvd from start to finish cheering us on, handing us cold water, waving banners of victory and shouting out encouragement. So, when we got out of the car at city hall and the cool air and damp gray clouds hung low in the sky and there was nobody lining the streets except a couple stray dogs and a homeless guy...well....anybody's excitement might have waned.

Thankfully, we had persuaded Papa Gene to run with us. So, the race began a little after 8 am this morning.

We had just made it to McDonald's when I hear Wylie mutter under his breath from behind me "Geez: this is harder than I thought".

By the time we were abeam the highschool, Wylie was imploring us to walk because his legs were hurting.

Just past Sand Canyon, he had to take his hoodie off.

Once we got behind the blvd after it curves slightly south (we took the safer route right along the Crafton Hills), Wylie was hurting.

I kept encouraging him and telling him he could do it. We were almost there.

Just about that time, my boss, Rick Gunn drove by and honked his horn. This lifted Wylie's spirits. Rick turned around and pulled up alongside us like a pace car. This inspired Wylie for a few more feet.

"Look Wylie. We've ran over 3 miles and I didn't think it was going to be so far a distance, do you want Pastor Rick to drive you the rest of the way to Starbucks?"

and, this is the money-line of my Thanksgiving....

"But, Mom, that would be cheating".

Up and down two muddy hills. Through the washed out dirt road to Overcrest Drive.

Finally, we're moving downhill the last mile. He can see the freeway traffic and he knows the finish line is near. He picks up steam. My dad keeps him running. I dart out ahead so I can snap a picture of them finishing the race. 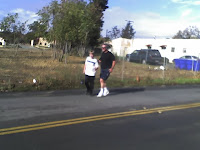 We turned the corner onto Hampton Rd and Wylie was just about to stop running when he hears shouts from the Starbucks parking lot....it's Tim, McKenna, Rick and our buddy Nick Crain...

"You can do it, Wylie! Woo Hoo! Keep going buddy!"

And, Wylie gives it all he has to the parking lot.

Man! IT was awesome. I love that kid.

What a fantastic way to begin this day of gratitude and thanksgiving.

After some high-fives, Wylie went immediately to the truck and got in. He was spent.

I bought my dad a coffee.

We drove back up to get the car from the city hall parking lot and returned to where the race had begun.

"Next year, we can add a few more runners".

Of Knights and Kings

A typical Saturday morning finds McKenna reading or drawing and the boys playing a variety of video games. Lately, with my teaching schedule, I have taken to sleeping in a bit on Saturdays because it is the only day I can!

Consider my joyful surprise when I get up, shower, come downstairs and discover the boys hanging out in the music room (formally the chaotic space--see twitter feed for pics--), belly-down, engaged in an exciting game of: chess.

Once upon a time, a neighbor "boy" (who is now a grown man), Bob Ferguson, taught my kids to play chess. We have played periodically since as a family, but not for a very long time. So, the boys must have been inspired by something or someone to move their strategic minds and abilities into the music room. As I walked over to the board, Campbell was schooling Wylie on the particulars of the Knight's moves and both were plotting their strategies.

This one moment was worth the hours of work last weekend to re-make that space into something liveable again! Who knows what they might trip into next....dominoes? Checkers? Cards? Or, maybe they'll transition over to the instruments and improvise a great jam session? There's art supplies and books in the music room as well. Tim and I always wanted the music room to be "the place" to hang out in our house. (As opposed to the tv room). Today, we got a little bit more of our dream to come true.

I'm a lover of lists.

Wylie has inherited this trait from me.

My lists revolve around verbs.

Clipped to our fridge (on top of previous important lists) is the Wise-man's Christmas list. Last count it had 35 items and climbing. Wylie always goes for the big ask.

And, he's not completely unaware of the challenging times we all find ourselves in economically speaking. Just the other day he passed by my office and remarked casually:

"Mom, holiday shopping is easier at Wal Mart" (having just heard that tag line on a commercial).

Now, lest you conclude my boy is overly materialistic and not centered on the true meaning of the season, I want to let you know he has made many other lists.

"Holiday Risk Game Championship: Who Wants to Play" (Kenna's the only one signed up so far)

"Thanksgiving Day race sign-ups" (yes, you can join that one--meet at City Hall at 8am to run the race with Wylie and me and a ragtag band of brothers...)

And, on the verbal list side, Wylie's current topic of interest is "created by:" names. That is, he can tell you who has created every cartoon and show he watches. He can cross-reference those creators if they have multiple shows and he can often tell you when the show/cartoon began.

Fascinating!
Posted by Jill Harris at 5:45 PM No comments:

Campbell: Mom, did you know President-Elect Obama's initials are "B. O." (giggle)

Wylie: Campbell! Don't mock him. He is going to be the President you know...

Wylie: Mom, if I was on a reality show like Endurance or Total Drama Island, would you vote for me?

Wylie: What's with this long division!? I wish pencils had never been invented...
Posted by Jill Harris at 2:02 PM 2 comments:

It's Sunday night, everyone is in bed (except me).

It's quiet (except for the soothing rhythm of the dishwasher).

I can still see and smell evidence of the activities of the afternoon and evening. Toys positioned on the ottoman mountain, papers fan across the sofa cushions, was that bacon earlier today?

It was cool enough outside and damp enough from the rain last night to have a fire. One cat still sits within range of the warm embers.

I have not been logging enough time on my own sofa lately. According to the media, most of the nation spends a good bit of time on the couch with the tv on. Not me. I'm an outlier. But, after this past six weeks I can honestly say: I love this spot!

It should not be so rare. I'm going to mark it in my calendar.

I was teaching tonight when this historic election was conceded. However, earlier in the day, Wylie (who has been very aware of all things political this election season) revealed the following:

"What do you mean by that, Wylie"?

Little did he know that his statement was prophetic. We found out that red states turned half blue in sufficient numbers to elect Senator Obama.

In eight years, Wylie and Campbell will be able to vote for the next President.

In four years, McKenna will vote in her first Presidential Election.

What color will the country be?