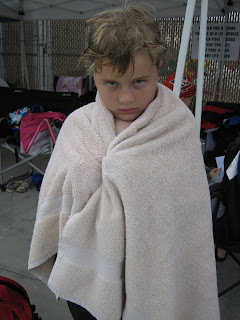 There is a book series out for elementary kids called Diary of a Whimpy Kid that is cute and very readable. Wylie has been engrossed and was close to finishing it yesterday. This birthed the following exchange:

Wylie: "Mom, I want to do a scrapbook of my life--you know--with pictures and stuff".

Me: "Ok, I have a scrapbook upstairs--I think--that you can use". I replied to him as I was tidying up dishes in the kitchen and getting ready to sit down for the first time on Tuesday to relax a little.

I realized, resistence was futile.

A reformed Creative Memories addict, of course I had scrapbooks upstairs he could use (along with 100s of dollars of other scrapbooking "stuff" that I had to have and haven't used in over 3 years....) Finally, I found a scrapbook I purchased for the boys hoping one day they might want to make their own book. See? How prophetic I was???

Once I got out the materials and supplies, Wylie began his "diary" in earnest. He worked on layouts, cutting pictures, writing narratives, drawing pictures, recalling trips, holidays, school mates....he was "focused". I had to cut him off at 9:30!

Here's five things I love about this recent development:

Stay tuned (and pass those die-cuts over here.....)

Posted by Jill Harris at 9:31 AM No comments:

So, this very cool cowboy/rodeo champion, Ty Murray, is on Dancing With the Stars this season (although, it has to be said...not for long....). During his introductory video history it showed him riding bulls and all the other stuff rodeo dudes do. Wylie has seen his share of rodeo dudes bite it on "Destroyed in Seconds" and other such shows on Discovery channel.

This morning, on the way to school, I asked Wylie if he thought he might want to ride in a rodeo someday....

"Not me! Those guys get smashed by bulls and need a lot of surgeries for like....spine removal, brain-mushing, and amnesia".

I'll take that as a no. Especially the spine removal part...
Posted by Jill Harris at 10:05 AM 1 comment:

Wylie is smitten with our "Wicked" soundtrack. Today he asked (on our way home from school where most interesting questions arise) which character would you be in The Wizard of Oz and/or Wicked?

I think it's a great question.

Wylie says he would for sure be the Tin-Man (a.k.a. Bach in Wicked).

Except for the Nose Thing

Wylie put in a purchase-order request for "Pinochio"...the latest edition of this timeless tale from Disney. In justifying his request he said, unequivocally, "I'm just like him; well, except for the nose thing".

How can I refuse a real boy?

In other Harris kid news...

Campbell had the best swim meet of his young life! He posted improved times in all events and even took first in two heats. He earned some solid points toward his trophy. Wylie gave his all on the breast and free. Though he was DQed on the breast for a late second hand touch (you've got to touch the wall with two hands simultaneously), he took the criticism with respect and announced afterwards "what do you expect--it's Redlands, I always get DQed at Redlands".

Mortal Marathon Training Update: finished a 10 mile run last Saturday at Hangar 24 (my husband is a fan) and felt great throughout. Even tried a chocolate gel pack for my nutrition! This weekend it is a 12 mile run...where will I go? What will I see?

More later this week...
Posted by Jill Harris at 10:22 PM No comments: