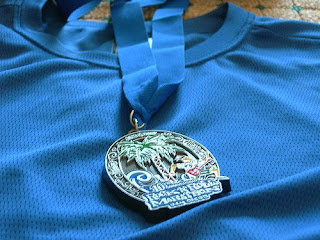 Words we attach particular meaning to.

Yesterday, on the way to swim practice with the boys, the merits of swimming and practicing more during the summer were being discussed. The main idea being: the more you swim, the better you swim. The boys, however, being 11 years old and inclined to just a bit of summer-time laziness took issue with the main idea. Using their keen logical minds one of them said:

"so, if I swim four days a week I'll be as good as Michael Phelps?"

I replied with something equally logical but parental:

"Not every great swimmer is an Olympian like Michael Phelps. There are far more great swimmers than there are Olympic swimmers".

Since Campbell just posted some much improved times at his last meet, it must have inspired Wylie to prophesy the following:

"Well, in five years Campbell can be an Olympican (pronounced o-limp-i-can) and I can be working at McDonalds with my best friend, Thomas".

Words we attach a particular meaning to....

Perspectives.
Posted by Jill Harris at 10:07 AM No comments:

Every Mile a Smile? 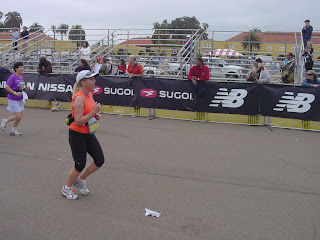 This was my first marathon. Just before entering Hwy. 163, I thought it might be my last. I've been training for about six months--following a modified schedule I found in John Bingham's book "Marathoning for Mortals". A life-long recreational jogger, I truly embraced the challenge of the longer runs and found the training was becoming satisfying on its own. The race was the catalyst that got me on the running journey.

Although I was not running for a specific cause, I picked up an idea from an article about former Presidential Candidate, Mike Huckabee. He completed several marathons by dedicating every mile to a special person. I adopted this into a personal theme "every mile is a smile". and even laminated a card with the names of my special people. In this way, the race became more than just a personal quest, it had taken on a life of its own and all the people who knew about it in my life were becoming invested with me.

About a month ago, after an 18 miler, I injured my i.t. band. I did everything I read about to treat it, resting as much as possible while still trying to train. In spite of all the rest, icing, elevation, stretching and focus on form, I was persistently having trouble with my left leg after long runs.

Consequently, I showed up at the starting line in San Diego knowing there was a strong possibility the left band could flare again. I began the race conservatively, certainly working on a negative split (about 13:20 overall pace). Just before we left the city-streets to enter 163, the i.t. band started "barking". Another mile or so and it was obviously not going to subside.
I was faced with a decision right then and there in the middle of that highway: 1) quit or 2) press on and see if I could finish. I found that if I changed up my run/walk breaks, I actually could make steady progress for stretches of time with pain below my "threshold". I adapted my race-day strategy from "work on a negative split" to "work on putting one foot in front of the other".

Obviously, I lagged behind the pace group I had optimistically hoped to follow. Still, after about 16 miles it became obvious to me that I was in no danger of missing the time cut-offs, so all was not lost.

By mile 21 I knew I was going to finish no matter what. My left leg was stiffening and my right foot was suffering from the unplanned additional walking, but for me that mile marker was a true point of no return. (Strangely enough, the laminated card with my special names/miles got lost when I grabbed my last gel pack! But, I knew who the last miles were for and that strengthened my resolve to leave nothing on reserve). I was all in.

Mile 25 to the finish I'll never forget. I saw people struggling to stay upright. I saw a lady just ahead of me who had to be in her 80s going strong and at the same time I saw a young college kid drop to the curb on my left. This last mile was no respecter of persons. When I felt the stabbing pain in my left knee more severely than any other time on the course I said outloud to no one in particular and to God: "Please, I just want to finish strong". And, right then a marine at the entrance to the depot looked me in the eye and said "you're going to make it, runner".
A half-a-mile more and I saw my husband, kids, and friends waving to me and shouting out in pride. Through the tunnel on the other side I saw the Rock n Roll logo and I swear the pain went away for the last few steps across the finish line.

One day later, I'm icing my knee and wincing through stretches. I've got a blister under my toenail, and all across the back of my right heel from the adapted walk/run technique I defaulted to on mile 10. I know I'll have to figure out a better way to run to avoid the i.t. band problem. There's work I'll have to do to fully recover.

However, Bingham wrote in his book that somewhere on the course what you believe about yourself will equal what is true about yourself. Somewhere around mile 10 I decided to keep going even though it hurt; at mile 21 I believed I would finish. At mile 26.2 I experienced the truth.

It was all worth it. 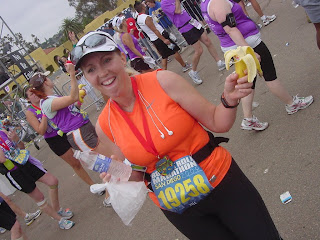